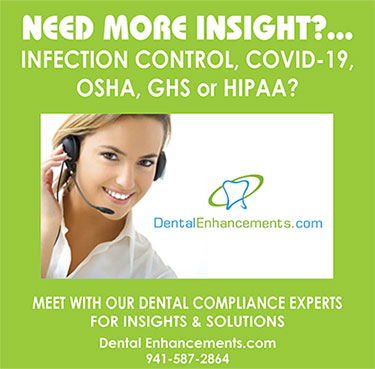 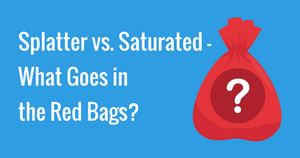 Splatter vs. Saturated- What Goes in the Red Bags?

There seems to be a big debate……..What soiled waste should we dispose of in the red bags?

First of all, it’s important to note that soft soiled waste needs to be disposed of at the point of use. For a dental office, this means keeping a small red bag in each operatory. And this OSHA safety requirement really does makes sense because it forces the clinician to handle the soiled waste less. Ultimately limiting the possibility for more exposure to the infectious waste. Small red bags then need to be sealed or fastened shut before walking them to the big red bag container for final disposal.

Now back to the big debate…..What do you put in your red bags: Splattered or Saturated Waste?

According to OSHA’s own definition:

“ALL PROCEDURES INVOLVING BLOOD…  or other potentially infectious materials shall be performed in such a manner as  to minimize splashing, spraying, splattering, and generation of droplets of these substances.”

But then, OSHA defers to whatever the Center for Disease Control (CDC) recommends. CDC has not changed their definition of Biomedical Waste since 2003. Their definition reads as follows:

This definition becomes rather antiquated and potentially dangerous when you think of the disease changes (with regard to Hepatitis C and D) and permitting your dental team to dispose of these items in the common trash.

Four States have smartened-up and have changed their State Regulations to mandatory “Disposal of Splattered Waste” into facility red bags. These four States are: Arkansas, Maryland, Utah, West Virginia.

You may want to implement this “Disposal of Splattered Waste” at your dental office, even though it is not State mandated. It makes sense. Have you ever dropped a bib clip or pen into the trash and had to dig it out? Digging it out typically requires digging through 5-10 patient’s soiled waste. Is that something you want your team exposed to on a daily basis?

Be smart. Have a staff meeting and discuss what splattered items you will put inside of your red bags going forward. While for most States, the Federal Law continues to defer to red bag disposal of “Saturated Waste”, the prudent, professional and most protective practice is to start disposing of all “Splattered Waste” into your point-of-use red bags.

Splattered Waste Disposal is in the bag! It’s hip, it’s safe, it’s the right thing to do.

Written by Jill Obrochta and Heather Whitt of Dental Enhancements